Happy Publication Day to The Paris Bookseller by Kerri Maher! This book chronicles the life of Sylvia Beach, the American expatriate behind the iconic Paris bookstore, Shakespeare & Company. 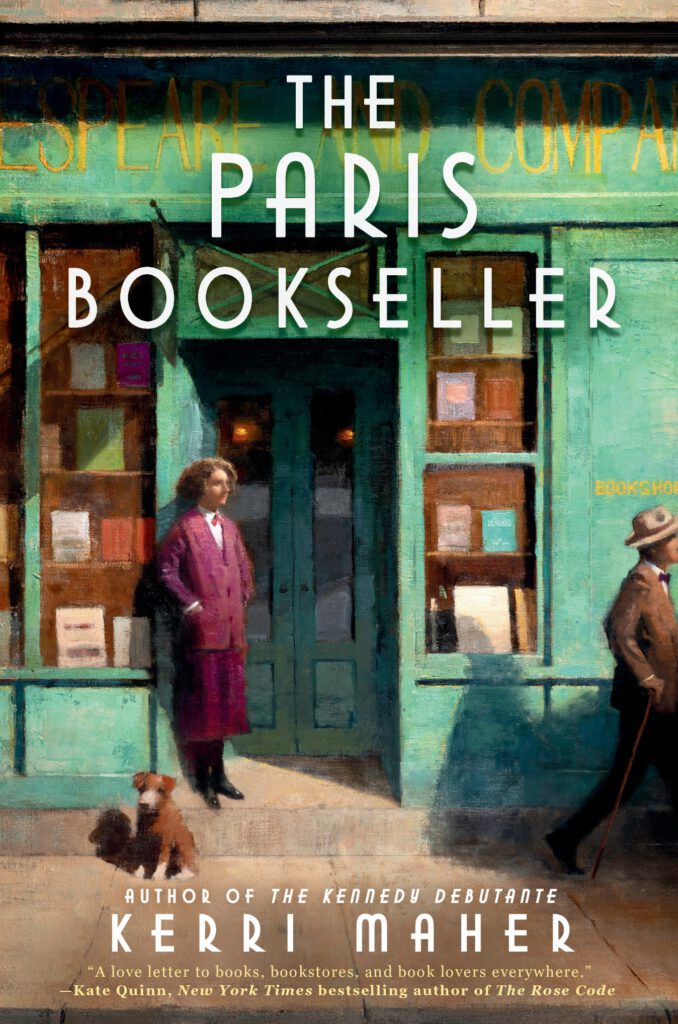 THE PARIS BOOKSELLER opens in 1917, as World War I ends and Paris is alive as a thriving center for culture and modernity. With new ideas rapidly taking the post-war world by storm, Sylvia Beach moves to Paris and opens the doors to her new English-language bookshop with the help of fellow writer and bookseller Adrienne Monnier. What starts as a partnership and friendship with Adrienne soon blossoms into a romance, and the women work together to create a haven for English writers and readers.

Sylvia quickly falls in love with James Joyce’s prose, especially his unpublished manuscript, Ulysses. When the contentious novel is banned in the United States for its obscenity, Sylvia takes a massive financial and personal risk, deciding to publish it under the auspices of Shakespeare and Company. She quickly realizes that the success and notoriety of publishing the most influential book of the century comes with steep costs. While many patrons applaud her efforts, some believe she has marred the integrity of Shakespeare and Company as she remains staunchly loyal to Joyce. Even worse, the future of her beloved store is threatened and her most enduring friendships are put to the test when Ulysses’ success leads to Joyce being wooed by other publishers. Now on the cusp of World War II and facing financial ruin, Sylvia must decide how far she will go to keep Shakespeare and Company alive.

Maher not only captures the life of a brave and inspiring bookseller, but also transports readers to the electric cultural atmosphere of Paris in the early 20th century. Sylvia’s romantic relationship with Adrienne Monnier is exquisitely rendered and offers an insightful look into what it meant to be a lesbian in Paris in the early to mid-twentieth century. Maher’s descriptions of a society grappling with the effects of World War I while simultaneously entering an age of modernism will captivate readers, as will cameo appearances from much-beloved literary figures. Published just in time for the 100th anniversary of Joyce’s Ulysses, THE PARIS BOOKSELLER is a moving celebration of the enduring power of literature and art.

Find it on: Amazon | Bookshop.org | Goodreads

“Sitting at her little desk in the Palais, Sylvia kept catching the scent of dust and lavender that reminded her of A. Monnier—the shop and the woman, both—and every time she buried her nose in her sleeves to find the source of it, she found it was always elusive.

She couldn’t help thinking that this distraction was just one more sign she was not destined to be a writer, despite the fact that after all the reading she’d done in her life, everyone around her, from her parents and sisters to her oldest friend, Carlotta Welles, just assumed she would be one.

“There’s a Walt Whitman in you” her father told her every time she brought home another high mark on a school essay. “I just know it”

But essays were not poems, or novels. When she tried her hand at verse or a story, it came out all wrong. She adored Whitman. To try to be anything remotely like him—or Kate Chopin or any of the Brontë sisters, for that matter—almost seemed an insult. It didn’t help that as she grew older, she began to prefer the writers she saw successfully continuing Whitman’s legacy, singing so startlingly of themselves and the world that she would sometimes complete one of their works and lie awake half the night wondering, How do they do it? How do they reach inside me, put their fist around my very soul, and rattle it in its cage? It had been like that with Chopin’s The Awakening especially, and also with James Joyce’s Portrait of the Artist as a Young Man. Oh god, she felt a roiling stew of lust and admiration and jealousy thinking of both those novels. The exquisite honesty with which they wrote about bodies and their cravings, and the guilt and consequences of those cravings, using words strung into unsettling sentences that embodied the very nature of the character’s inner turmoil, made Sylvia sweat in her sheets.

Could she ever write so bravely, knowing her minister father, whom she loved dearly, would read every word? It was one thing for him to quietly accept her spinsterhood, and perhaps even her discreet sapphism—for he’d never encouraged her to marry and he’d never questioned the friendships she’d had with women, which after all had run the gamut between entirely platonic and, rarely, heart-wrenchingly intimate—but it would be quite another thing for her to write about her desires with the kind of honesty she admired in the new writing she was starting to see in the more progressive journals.

Could she write about her own deepest longings with abandon, without abandoning herself? Could she help fill the pages of her favorite journal, The Little Review, which its editor Margaret Anderson had boldly left entirely blank in 1916, publishing twenty-odd white pages with only an editorial saying that she was no longer willing to publish good enough writing; everything she published had to be true art. Art that would remake the world. And Sylvia believed with all her heart that this was the purpose of art—to be new, to make change, to alter minds.

She recalled her mother’s reply to her father’s suggestion about Whitman: “Or maybe she’ll be the next Elizabeth Cady Stanton.” Why did her parents have to pick such big shoes for her to fill?”

Kerri Maher is the author of The Girl in White Gloves, The Kennedy Debutante, and, under the name Kerri Majors, This is Not a Writing Manual: Notes for the Young Writer in the Real World. She holds an MFA from Columbia University and was a writing professor for many years. She now writes full-time and lives with her daughter and dog in a leafy suburb west of Boston, Massachusetts. Learn more online at kerrimaher.com.