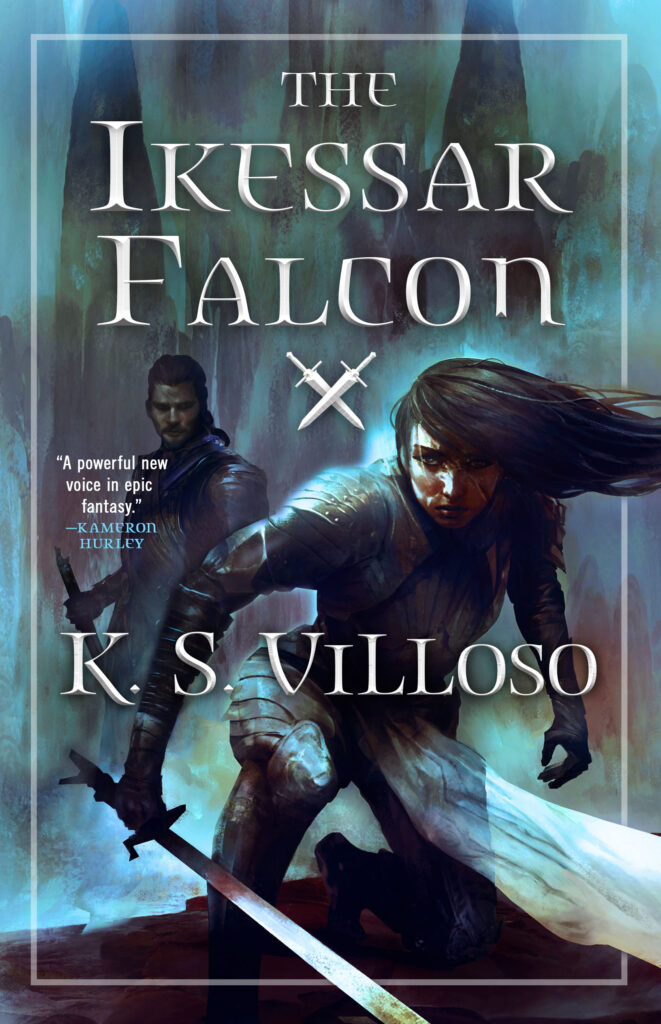 The Bitch Queen returns in The Ikessar Falcon, the action-packed sequel to K. S. Villoso’s acclaimed fantasy debut, The Wolf of Oren-Yaro.

Abandoned by her people, Queen Talyien’s quest takes a turn for the worse as she stumbles upon a plot deeper and more sinister than she could have ever imagined, one that will displace her king and see her son dead. The road home beckons, strewn with a tangled web of deceit and unimaginable horrors – creatures from the dark, mad dragons and men with hearts hungry for power.

To save her land, Talyien must confront the myth others have built around her: Warlord Yeshin’s daughter, symbol of peace, warrior and queen and everything she could never be.

The price for failure is steep. Her friends are few. And a nation carved by a murderer can only be destined for war. 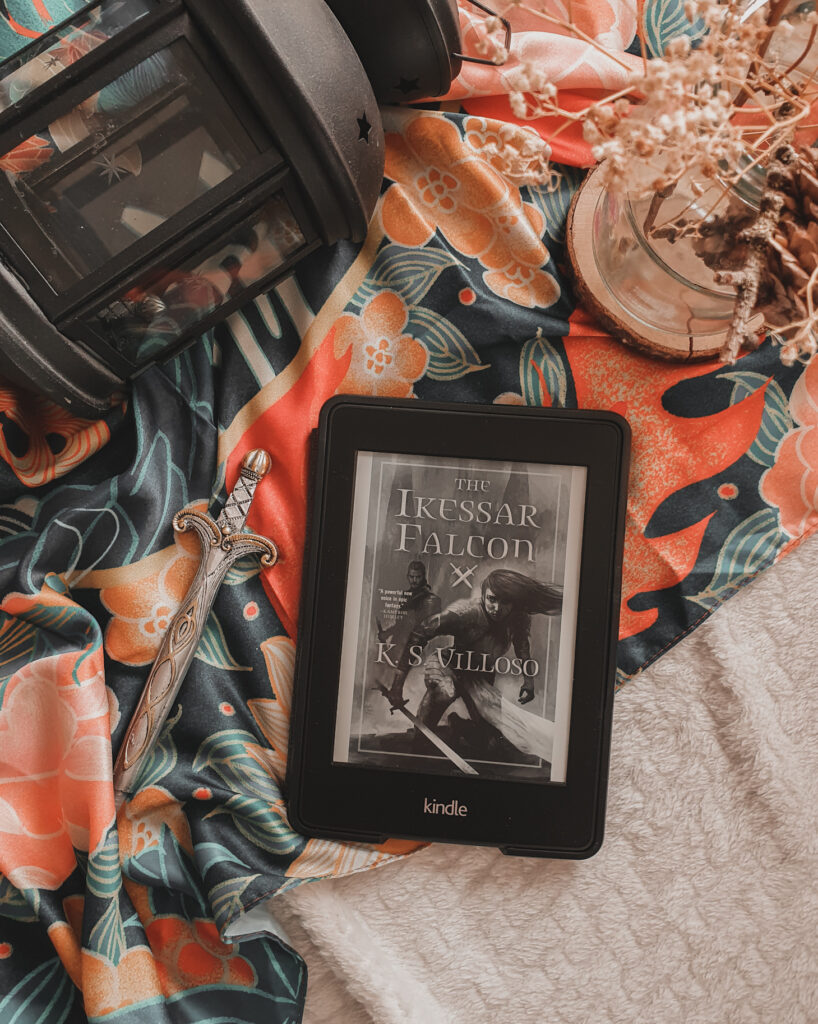 I read The Wolf of Oren-Yaro in February and I was also part of the blog tour so I’m thrilled to have been selected for the blog tour of the sequel, The Ikessar Falcon. Thank you so much to Shealea from Caffeine Book Tours for hosting it.

“We cling to what is broken when we have no choice. Even love that tastes like poison, that presses like a blade on your throat, is better than gaping emptiness.”

Talyien aren dar Orenar! This woman can’t catch a break. She is still haunted by her father’s words and legacy. The pressure to be like her father, who is a ruthless warlord, is higher than ever. It doesn’t help that the other Warlords are questioning her ability to rule her kingdom and just waiting for her to make mistakes. Not to mention that she still needs to return back home especially now that her son is in great danger. She is still the same brave and strong bitch queen but I felt like I got to know her deeply. I appreciated her character even more. Her journey, though not always pleasant, helps her to get to know more about herself, her people, and the different issues they have that she’s not aware of. One of my favorite characters was Nor and this book cemented my admiration for her. It was also great to learn more about Khine. I still would like to punch Rayyel and Agos. Seriously!

“But it is difficult to grasp the weight of our own actions, to make sense of the ripples our every decision makes. It is why we hurt and continue to get hurt; how we can plunge a knife into someone, wash the blood off, and pretend it didn’t happen. Even when your entire world turns upside down, you carry on like it didn’t.”

This sequel didn’t disappoint. After reading the first book, I thought I was ready for whatever action or tension the sequel has in store for me. But I was wrong. The Ikessar Falcon was more intense, action-packed, and definitely shocking! There were still some scenes that were a bit too slow for me but other than that, I thought the writing was incredible.

“Some are born with the power to turn the tide even before they realize what they are doing. Others… aren’t. Some of us have to fight to make a difference from the moment we are born. We try to crest along calm waters because we are helpless against the tide, and even then, a single wave might be enough to sweep us away.”

Just like in the first book, the world building continued to amaze me. We finally get to see more of the world that was mentioned in the first book including their people and their distinct culture. We also learn more about the magic system and meet some magical creatures throughout the story. I would also like to mention how thankful I was that a recap of what happened in The Wolf of Oren-Yaro is included in this book.

Talyien embodies fierceness. She represents not only Filipino women but women in general. She is complex and flawed which made her character felt so real. I admired her determination and unconditional love. I have already mentioned my thoughts about this on my review of The Wolf of Oren-Yaro so feel free to check it here.

This book has left me wanting for more! I highly recommend this book if you’re looking for an epic fantasy novel inspired by Southeast Asian culture with intricate characters and beautiful writing. I can’t wait for the next book!

“We have to keep going even if all we have left are pieces of what we thought we were.” 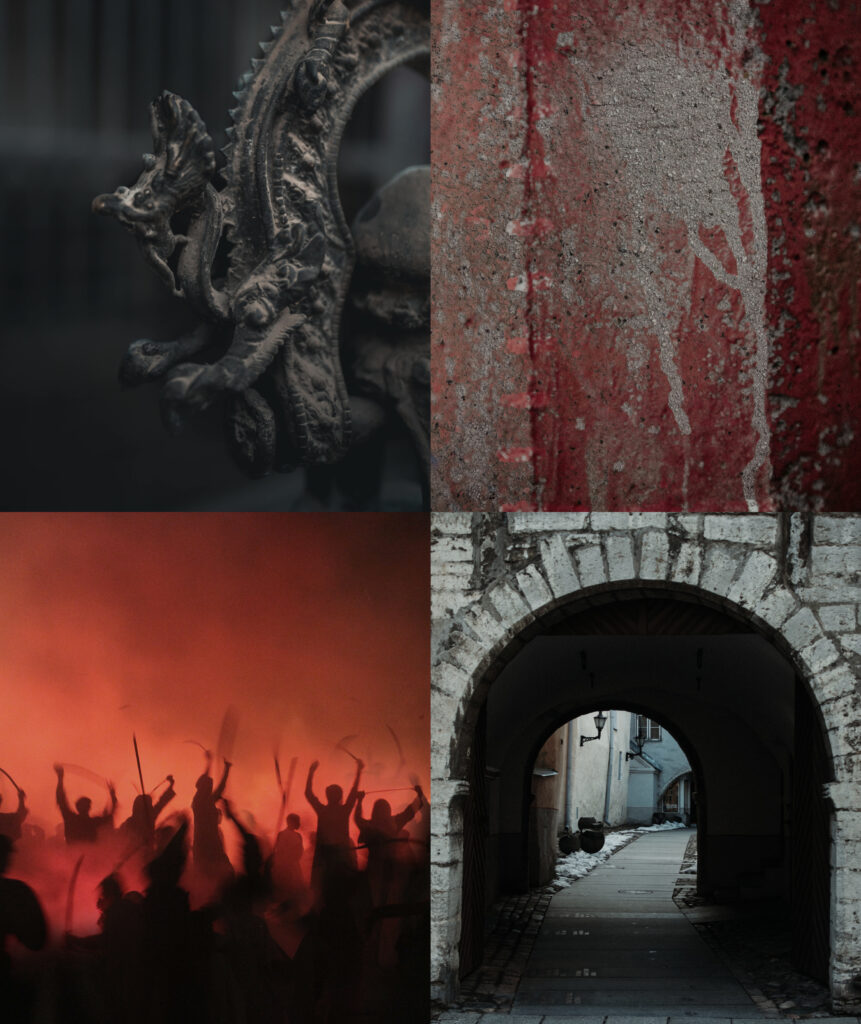 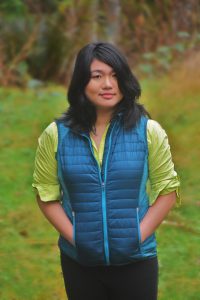 Click the banner to check out the rest of the tour and join the conversation.
The blog tour is from September 14-19 (International) and September 21-26 (PH).

Disclaimer: I received an advance reader’s copy of this book from the publisher and Caffeine Book Tours as part of my participation in the #DethroneTheDragonlord tour. This did not affect my overall opinion of the book. The quotes are taken from the advance reader’s copy and they are subject to change upon publication. Photo credits : dragon, red, riot, alley.