FRIDAY FINDS showcases the books you ‘found’ and added to your To Be Read (TBR) list… whether you found them online, or in a bookstore, or in the library — wherever! (they aren’t necessarily books you purchased). Hosted by teh awesome Jenn of A Daily Rhythm.

I’ve been seeing these books lately especially after the released of the second book, The Heart of Betrayal,  last month. The feedbacks and reviews are all great so I’ve decided to add these on my ever-growing TBR list.

A princess must find her place in a reborn world.
She flees on her wedding day.
She steals ancient documents from the Chancellor’s secret collection.
She is pursued by bounty hunters sent by her own father.
She is Princess Lia, seventeen, First Daughter of the House of Morrighan.

The Kingdom of Morrighan is steeped in tradition and the stories of a bygone world, but some traditions Lia can’t abide. Like having to marry someone she’s never met to secure a political alliance.

Fed up and ready for a new life, Lia flees to a distant village on the morning of her wedding. She settles in among the common folk, intrigued when two mysterious and handsome strangers arrive—and unaware that one is the jilted prince and the other an assassin sent to kill her. Deceptions swirl and Lia finds herself on the brink of unlocking perilous secrets—secrets that may unravel her world—even as she feels herself falling in love. 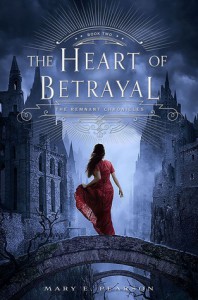 Intrigue abounds in this hotly anticipated sequel to The Kiss of Deception!

Held captive in the barbarian kingdom of Venda, Lia and Rafe have little chance of escape. Desperate to save her life, Lia’s erstwhile assassin, Kaden, has told the Vendan Komizar that she has the gift, and the Komizar’s interest in Lia is greater than anyone could have foreseen.

Meanwhile, nothing is straightforward: there’s Rafe, who lied to Lia, but has sacrificed his freedom to protect her; Kaden, who meant to assassinate her but has now saved her life; and the Vendans, whom Lia always believed to be barbarians. Now that she lives amongst them, however, she realizes that may be far from the truth. Wrestling with her upbringing, her gift, and her sense of self, Lia must make powerful choices that will affect her country… and her own destiny.

And look at those pretty covers! Share your Friday Finds by commenting below or leave a link so I can see it.

One thought on “Friday Finds : The Remnant Chronicles by Mary E. Pearson”