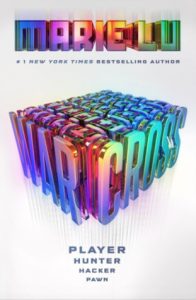 Convinced she’s going to be arrested, Emika is shocked when instead she gets a call from the game’s creator, the elusive young billionaire Hideo Tanaka, with an irresistible offer. He needs a spy on the inside of this year’s tournament in order to uncover a security problem… and he wants Emika for the job. With no time to lose, Emika’s whisked off to Tokyo and thrust into a world of fame and fortune that she’s only dreamed of. But soon her investigation uncovers a sinister plot, with major consequences for the entire Warcross empire.

I haven’t read any books of Marie Lu before but I’ve been hearing so many great things about her works. So I was quite expecting a lot from this book and even though I didn’t give it a perfect 5-rating, I wasn’t disappointed at all.

I totally enjoyed reading Warcross. At first, I couldn’t help comparing it to Sword Art Online (which I totally love) but Warcross is so much more. I’m not usually into sci-fi novels but this book was an exemption and I’m really glad that I gave it a try.

Some people still say that Warcross is just a stupid game. Others say it’s a revolution. But for me and millions of others, it’s the only foolproof way to forget our troubles.

One of the things that I love about this book is that it has a very diverse cast of characters. From different ethnicities to LGBTQ+ community and not to mention a character with disability.

Emika Chen, the main character, is definitely my favorite. She’s a total badass. I love her rainbow dyed hair (that I wish I can also have), her sleeve tattoos (and they’re meanings) and the fact that she’s a bounty hunter and a very skilled hacker. I love her determination and for not being afraid of who she is. Her decision at the end made me love her even more.

Now let’s talk about Hideo Tanaka. He’s the young billionaire behind the virtual reality game Warcross. He’s undeniably genius and *ahem* hot. I loved the mystery that surrounds his personality. He somehow reminded me of Light Yagami (Death Note) during the last part of the story.

I loved the chemistry between Emika and Hideo but it’s totally okay with me even without their romance. I would love to know more about the side characters especially Hamilton, Roshan and Zero.

The futuristic world that the author has created using her excellent style of writing is very fascinating and impressive. I loved the details and even though the concept (of Warcross) is not that unique, the author still did an excellent job on creating her own distinctive story.

I love that this book is written from Emika’s perspective. I have to admit that some of the coding and tech-related stuff didn’t make sense to me but it’s totally fine because I wasn’t focusing on those things. I think it also helps that I’m familiar with some online (strategy) games like Warcross. But I’m seriously hoping that we can have this kind of gaming in the future. With our current technology, I think it would be possible. I’m already imagining myself walking on the street with my virtual dragons flying above me (I still have the Game of Thrones hangover obviously.)

The last pages were intense and overwhelming (in a good way, I think) because of all the revelations. One of the major plot twists was quite predictable and I wasn’t sure if it meant to be like that. But some of them were really unexpected. I had mixed feelings about the ending though. It’s satisfying and annoying at the same time. I actually thought this is a stand-alone. Now I need the sequel!

Warcross is very entertaining, gripping and overall amazing. Highly recommended whether or not you’re into sci-fi novels.

Every locked door has a key. Every problem has a solution.

*Huge thanks to G.P. Putnam’s Sons Books for Young Readers and Netgalley for the advance copy in exchange for my honest and unbiased review.* / Featured Image Source : http://playwarcross.com/