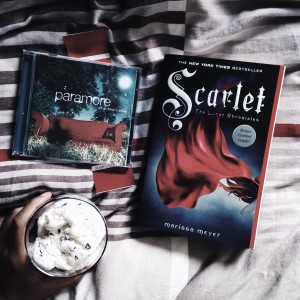 The writing style is still incredible. I love how Meyer retells the scenes from Little Red Riding Hood into this book. Especially the one when the bad wolf pretended to be her Granny in order trick her. I didn’t see that one coming in this book and I was impressed.

The world-building becomes more astonishing because we get to know what is happening in the other parts of the world. I think this is the first dystopian book that I’ve read which do not focus on one place where the dystopian society is happening.

But why I didn’t give this a perfect five? The back and forth from Scarlet in France to Cinder in New Beijing is a bit confusing for me. And there is still no clear history about the Lunars. Are they aliens? Or also humans who travelled to the moon and decided to live there?Also, I’m having a hard time picturing Wolf and Thorne in my head. I’m not sure why.

The ending makes me more eager to buy a copy of Cress. I want to know the result of Kai’s announcement and how Cress will become a part of the story. Scarlet is an action-packed and exciting read. I totally enjoyed reading this book and I highly recommend it.

There is a short story entitled “The Queen’s Army” included on my copy of Scarlet and I’ve found out that it’s about the wolf pack.

One thought on “Book Review : Scarlet by Marissa Meyer”