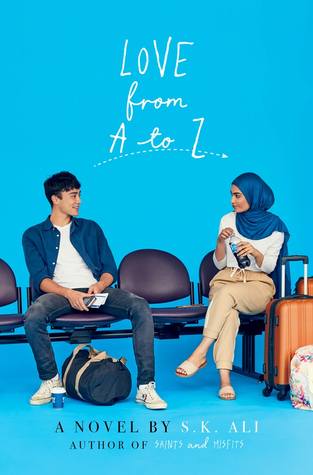 A marvel: something you find amazing. Even ordinary-amazing. Like potatoes—because they make French fries happen. Like the perfect fries Adam and his mom used to make together.

An oddity: whatever gives you pause. Like the fact that there are hateful people in the world. Like Zayneb’s teacher, who won’t stop reminding the class how “bad” Muslims are.

But Zayneb, the only Muslim in class, isn’t bad. She’s angry. When she gets suspended for confronting her teacher, and he begins investigating her activist friends, Zayneb heads to her aunt’s house in Doha, Qatar, for an early start to spring break. Fueled by the guilt of getting her friends in trouble, she resolves to try out a newer, “nicer” version of herself in a place where no one knows her.

Then her path crosses with Adam’s.

Since he got diagnosed with multiple sclerosis in November, Adam’s stopped going to classes, intent, instead, on perfecting the making of things. Intent on keeping the memory of his mom alive for his little sister. Adam’s also intent on keeping his diagnosis a secret from his grieving father.

Alone, Adam and Zayneb are playing roles for others, keeping their real thoughts locked away in their journals. Until a marvel and an oddity occurs…

I saw this book on Sumaiyya’s bookstagram and since I trust her recommendations especially when it comes to books with Muslim or Islam representation, I didn’t think twice on reading it.

Zayneb Malik, an 18-year old Hijabi, gets suspended from her school for confronting her Islamophobic teacher. She’s now on her way to Doha, Qatar to spend her early spring break with her Aunt. Then she meets Adam Chen. He is diagnosed with multiple sclerosis, the same condition that took his mother’s life, so he has decided to dropped out of school and fly back home. He is keeping it as a secret until he figures out a way how to tell his father and sister about it.

The two main characters are the complete opposite but they fit perfectly together. Not to mention, they both have a “marvels and oddities” journal. Zayneb is very admirable. She can be stubborn but she’s definitely determined and fierce. Adam is quiet, kind, and caring. He’s also very creative. I liked them individually and as a couple. Their romance wasn’t forced and it was a pleasure to read. The side characters are lovable too like Zayneb’s super cool Aunt and Adam’s smart little sister.

The story is written through journal entries which I really enjoyed plus I loved the idea of having a “marvels and oddities” journal. I listened to the audiobook first and it was good but with this kind of format, I prefer to read the words so I transferred to the ebook edition. The writing was simple but effective. It’s my first time reading a book set in Qatar which was a delight but I wished there were more Qatari or Arab characters included aside from the Uber driver.

One of the main characters converted to Islam and the reason behind the decision is very heartwarming to read. It was also interesting because I don’t think I read YA books (or any books in general) that has this kind of representation.

Overall, this was definitely a refreshing read. The story is not only about romantic love but also love within family and friends. It’s about faith, passion, and hope.

“Maybe that’s what living is—recognizing the marvels and oddities around you.”