Book Review : From Sand and Ash

Italy, 1943—Germany occupies much of the country, placing the Jewish population in grave danger during World War II.

As children, Eva Rosselli and Angelo Bianco were raised like family but divided by circumstance and religion. As the years go by, the two find themselves falling in love. But the church calls to Angelo and, despite his deep feelings for Eva, he chooses the priesthood.

Now, more than a decade later, Angelo is a Catholic priest and Eva is a woman with nowhere to turn. With the Gestapo closing in, Angelo hides Eva within the walls of a convent, where Eva discovers she is just one of many Jews being sheltered by the Catholic Church.

But Eva can’t quietly hide, waiting for deliverance, while Angelo risks everything to keep her safe. With the world at war and so many in need, Angelo and Eva face trial after trial, choice after agonizing choice, until fate and fortune finally collide, leaving them with the most difficult decision of all. x 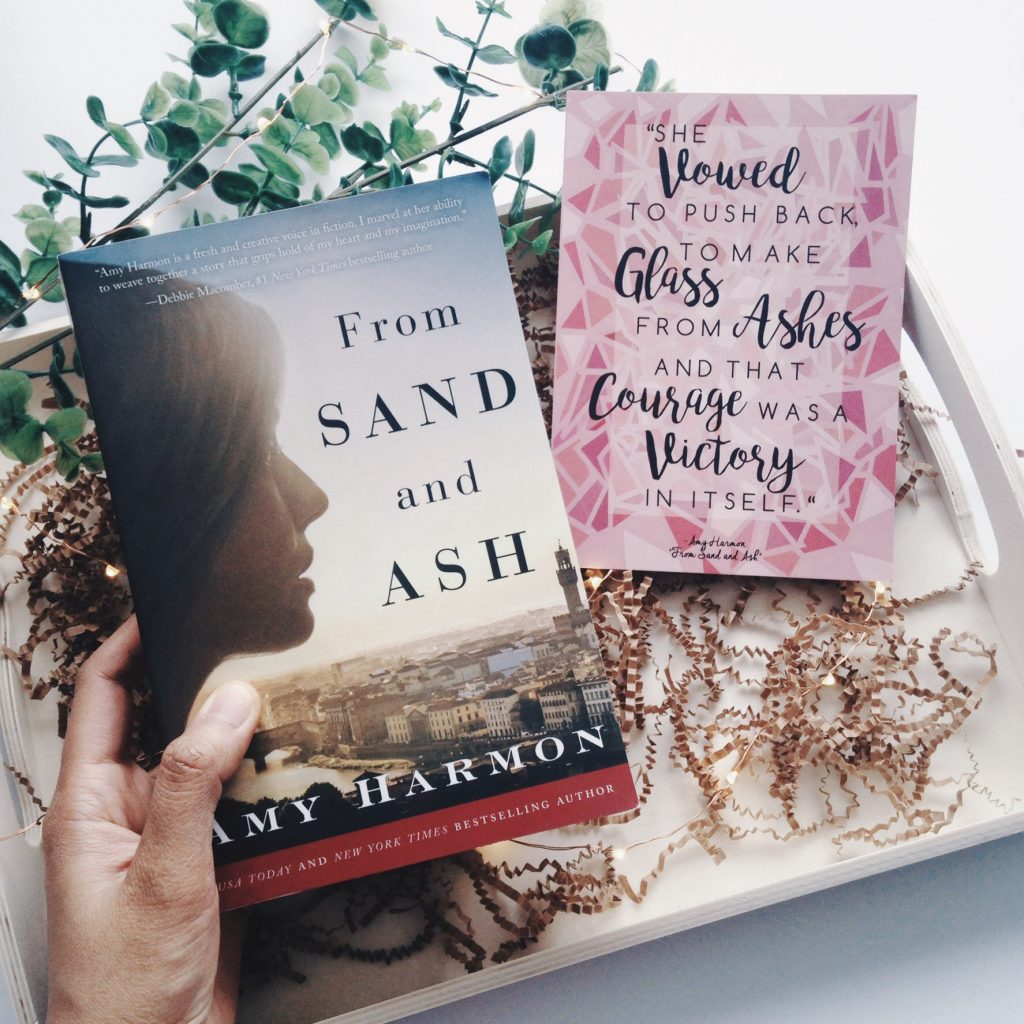 Right after reading Making Faces last month, I knew that I have found my new favorite author. Amy Harmon’s writing style is incredibly impressive and her stories are truly one of a kind. Shoutout to my bae/Ed angel Andrea for introducing me to Amy Harmon’s book. I’m so thankful that she forced me to read Making Faces.

I got my copy of From Sand and Ash from the February Box of Once Upon A Book Club. I was excited when I heard that the featured book is a historical fiction/romance set in Italy during WWII.

From Sand and Ash is a story of two different people meant for each other but were seperated by their religions and the cruelty of war. Will there be happily ever after for Eva and Angelo?

Eva Roselli is an Italian Jew. She is smart, lovely and a very talented violinist. She is living a wealthy and happy life with her father in Italy until the war reached their country and new laws are being implemented against Jewish people. Angelo Bianco, a Catholic living in the United States, has been sent to Italy by his father to live with his Italian grandparents after his mother died. His grandparents are working for Eva’s family. The two grew up together and became inseperable until Angelo decided to join the priesthood despite his deep feelings for Eva. Angelo is now a Catholic priest and Eva is one of the targets of the Gestapo. Angelo does his best to keep Eva safe but she cannot accept to do nothing and wait until the war is over.

War has a way of stripping us of perspective. War is about life and death, and it paints everything in shades of now or never. We do things we otherwise wouldn’t because never is so frightening and now, so comforting.

The characters in this book are extraordinary. Eva and Angelo make a perfect couple. They’re both determined, selfless, brave and passionate. The relationship they have is no doubt a forbidden one but this book is not all about it. This is definitely more than just a romance. I also love the impact of music in the story.

As I’ve mentioned earlier, Harmon’s writing style is incredibly impressive and it’s the most favorite thing about her books. She writes in honesty. The narration is on point plus the story is very captivating. I felt the character’s pain and fear. I got nervous and scared for them. At some point, I felt like I was there laughing and crying with them. There are so many great lines (quotes) in this book which I love and here is one of them :

Fear is strange. It settles on chests and seeps through skin, through layers of tissue, muscle, and bone and collects in a soul-sized black hole, sucking the joy out of life, the pleasure, the beauty. But not the hope. Somehow, the hope is the only thing resistant to the fear, and it is that hope that makes the next breath possible, the next step, the next tiny act of rebellion, even if that rebellion is simply staying alive.

This book not only tells us the struggles of the Jewish people during WWII but also the danger that the Catholic Churches/people went through by helping and keeping the Jewish people safe. I actually didn’t have any idea that the Catholic Churches did this heroic thing during that time. I’ve learned something about Judaism, DELASEM, and other tragic events that happened in other parts of Europe during WWII. This is one of the reasons why I love reading historical fiction stories. I learn a lot of things about the past which is sadly, still happening in the present. Yes, some of the characters and events were fictional but the emotions are totally real.

My prayer is that people of today will know the past so they won’t repeat it. – Author’s Note

You might be asking where did the .5 of my rating go. I originally gave this book a 4-star rating but as I was writing this review, I couldn’t think of any major things that I didn’t like about the book except how the story wrapped up. It’s a little predictable and convenient. Like it’s too good to be true. I love the epilogue though.

From Sand and Ash is a very inspiring and powerful read. A story of love, faith and goodness in mankind. This is definitely a must-read.