“Have you ever heard of koi no yokan?” he asked. “It’s Japanese,” he explained as he trailed his fingers lightly down one of my arms. “It doesn’t have an English equivalent. Roughly translated, it’s a term for the feeling that you have when you first meet someone.”

“Like love at first sight?” I asked, tipping my head up toward his.

“No, not quite like that. It’s more like you know that a future love with that person is inevitable, but it diesn’t exist in that moment.”

First of all, I would like to thank Ms. Lily Paradis for sending me a Kindle version of this book. It means a lot because this is the very first ebook sent to me by the author herself and i love you for that. So, let’s talk about Ms. Paradis’ debut novel entitled Ignite.

Lauren Lindsay just turned twenty-one and is living her own life after the death of her father and the abandonement of her mother. She only has her twin brother but he’s also living away from her. While getting her new I.D. at DMV, she spotted a Henry Cavill-like guy named Dean Powell. After meeting her Uncle Jed, she learned about the death of her step-mother and the big responsibilities waiting for her. She was chosen to take the legal guardianship of her three step siblings. She has to decide if she will accept it or not.

So let’s talk about Lauren. I love how relatable her character is because I’ll also react the same like she did if that thing happened to me. She’s so brave for trying to perform the responsibilities of being the guardian of the kids eventhough she barely know them. She even thinks about their future first and set aside her own issues and I admire her for that. I like her clumsiness and not to mention, I like girls with red hair.

Dean, a guy who is “still looked good even with every inch of his exposed skin covered in mud” according to Lauren, is sweet, funny and mysterious. He is actually my type of guy and I can’t help not to think that he has some similarities to my fiance including Dean’s womanizer past and how he is changing himself into a better man. Aside from his relationship with Lauren, I also adore his closeness to Lauren’s friends and step siblings especially with the cute 4-year old Emma. I also enjoyed the supporting characters and their role. They’ve made the whole story more interesting.

One of the things that Lauren and Dean have in common is they’ve been through a lot of pain brought by their own personal experiences and they are both eager to change. These made them both perfect for each other.

I have to admit that I was quite lost in the beginning because I felt like a lot of things were happening and there were no character backgrounds. I have questions like “How about Lauren’s class if she will take care the three kids? Wait, does she go to school?”. But everything made sense throughout the story. I just wish there’s a clear explanation why Lauren’s step-mom chose her as the guardian. There are also some typo-errors but it’s minimal so it didn’t bother me at all.

I was over-thinking about the mysterious parts and a bit nervous with the revelation. I cannot deny that I love how it turned out. Kudos to Ms. Paradis for writing a very impressive debut novel. I’m excited to read Dean’s POV and to know more about him on Arclight.

All in all, this book is a perfect balance of New Adult and Young Adult. I would recommend this for those who love a good romance book. 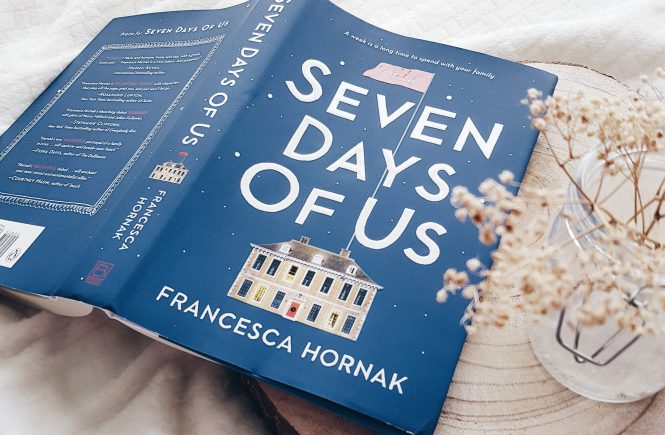 Book Review : Seven Days Of Us by Francesca Hornak